Had a crappy few weeks lately of things breaking and ended up having the most boring weekend ever while both my xbox and my macbook were out of commission for repairs.

I used the downtime as best I could though and caught up on some films that’d been on the to do list for a while and some reading.

I’ve been making the most of the wonderful programming at the DCA and seen two amazing Jean-Luc Godard films. The part hard boiled pulp fiction gumshoe / part sci-fi proto Blade Runner epic Alphaville. It has one of most beautiful casts apart from the awesome Eddie Constantine who plays lead protagonist Lemmy Caution whose face looks as though it was rendered in rough cement or something. Although this was made back in 65 and made on a tiny budget with no special effects, it shows this wonderful dystopian near future far more believably than many of todays absurd CGI heavy big budget idiotfests.

Next on the DCA menu was Le Mepris, another Godard affair. Cue another stunning cast, most notaby Bridgit Bardot’s arse which is on screen far more than it technically should have been and the legendary Jack Palance who for me is one of these guys who just embodies a certain type of character. He just seems to ooze this charming, calm exterior with pure mobster rage just bubbling under the surface. There were a few moments in Le Mepris that made me feel like I’d tapped into the roots of certain Lynch moments, most notably the audition scene of the dancer in the red dress that I kept having to double take as the looks and demeanour were so close to Sherilyn Fenn’s stunning Audrey Horne it was uncanny. Georges Delerue’s swooping string lament that has been overused on a million wanky perfume adverts really fell into place as a heavy lament to a relationship falling apart within the film production that is also disintegrating. Haunting. The spaghetti ghost town of the italian film studio at the start was also pretty appealing. Wall to wall good to the extent that I’m considering buying the huge Godard DVD boxset.

I’m reading Sculpting in Time, the book in which Tarkovsky talks frankly about his work and inspiration and the like so I figured it’d be best to bone up on the remaining films I hadn’t seen yet. Over the course of a few nights I watched Ivan’s Childhood, Andrei Rublyev and The Sacrifice.

Ivan’s Childhood featured some stunning locations which, as usual with this master of cinema, felt like being in the middle of an Ansel Adams photo.

Andrei Rublev is one of the films that took me two attempts/sittings to get through. It’s incredibly long and covers a chunk of Russian history albeit from the fringes rather than an epicentre. My attention did drift a few times in the first half but the second felt more compact and to the point.

The Sacrifice, his last film, is up there with my favourites, it has one of these calm, hyper real feels to it interspersed with magic and absolutely unbelievably good set pieces. My only criticism lies with the actor who played Alexadner’s wife who I felt overegged the “hysterical wife” role a bit.

For a bit of light relief I rewatched Tim Burton’s Batman and Batman Returns which still just rock, I’ve had the danny Elfman themes laser etched into my young mind I think. Jack Nicholson’s scenery chewing Joker is still an interesting take on Batman’s nemesis. Also, I don’t think my 12 year old brain was quite capable of appreciating Pfeiffer’s Catwoman in her filthy goodness at the time. Meeeowwwww!!!

I caught up on a pile of stuff actually; Gonzo, The Baader Meinhoff Complex (damn those were some sexy looking terrorists!!), V for Vendetta, Room for Romeo Brass and although I find most of his films just too full of cheese to properly enjoy, Hitchcock’s Rear Window.

Readingwise, having got really into DC via Grant Morrison’s involvement in 52, I got the thirst to work out what led up to and follows that series so I’ve done Identity Crisis, Infinite Crisis, Countdown to Final Crisis along with Arkham Asylum: A serious house on serious earth and Frank Miller’s All Star Batman and Robin the Boy Wonder which is a nice pulpy reboot forgoing most of the established history and origin. I’m waiting for Final Crisis and Morrison’s run on All Star Superman to arrive. I also managed to rip through V for Vendetta in a day rectifying the unusual hole in my graphic novel list.

On the non comic book front I’m enjoying little bits of David Foster Wallace’s A Supposedly Fun Thing I’ll Never Do Again which is full of razor sharp observation and commentary, it’s very funny in places and in the main, the way he uses language is a bit like him punching you in the brain every time he makes a point. Really enjoyable but I can only digest it in smallish chunks which is handy as that’s how the book is broken up.

That’s all I can be bothered typing, for now anyways.

Thierry Lemmers over at EARlabs posted his thoughts on Ghost Frequencies this week.

“Erstlaub‚Äôs great 2007 release ‚ÄúOn Becoming An island‚Äù was one of my favorite releases of that year. Part of its charm was derived from the fact that it provided an exhilarating mixture of ambient and melodic noise which I had not heard before. Has Erstlaub succeeded to prolong his adventurous style of making music ?

After last year‚Äôs mysteriously titled ‚ÄúI Am the Line Drawn in the Sand between the Living and Dead‚Äù, Erstlaub returns to us with another of his static-laden drone works,‚ÄúBroadcasting on Ghost Frequencies”, which was most generously packed away to me by Moving Furniture Records, a small record-label owned by Earlabs‚Äô own Sietse van Erve.

As always, Dave Fyans, the man lurking behind the Erstlaub moniker, treats us on a lengthy dunking into a well filled with white noise that gently bounces and rocks around the auditive spectrum like a raft carried away on a frothing rapid. After a few minutes of gritty, subtle feedback, the music bottoms out in a more tranquil flow of drones overlapping a current of shifting sounds which seem to curl and coil in various hypnotic patterns.

The watery textures certainly make for a pleasurable ride but they sometimes lack a certain cohesion which enables the different fragments to come together in a comprehensive way. At one point, I am strangely reminded of Wolfgang Voigt‚Äôs more sedate GAS-moments but after a few moments, rumbling drones interfere to shake me out of my reverie.

However rude those awakenings may sometimes be, they do provide a sense that Erstlaub does not want to stick to comfortable patterns. As with his previous releases, the music changes pitch constantly, exploring different sound patterns and therefore avoiding tedious repetition.

As such,‚ÄúBroadcasting on Ghost Frequencies‚Äù certainly deserves praise. Although the different parts often seem to collide with another, the resulting chemistry more than makes up for it. With a single piece which clocks around forty minutes plus, Erstlaub has managed once more to keep his presentation fresh and daring, which is no mean feat by all means considering the duration. For the near future, I‚Äôm certainly game for more of these rocky rides, but I do hope that inertia does not creep in from behind.”

Just a little summer update for you I guess. I initially came by to tell you that I’m not going to be up to much and ended up decided to just give you a free EP.

Musically I’m putting things on a back burner for a little while, not for any determinate length of time or particular reason. I’ve got a few concepts brewing for future titles so I want to let them expand under their own weight until the time feels right to conceive and realise them.

In the meantime, I put together the In Darkened Corners EP clocking in at 15.57 made up of 2 separate tracks. These may or may not appear in other (or similar) forms in future but in the meantime, just enjoy them for what they are, upbeat summer dancefloor tunes (no stupid, of course they aren’t). 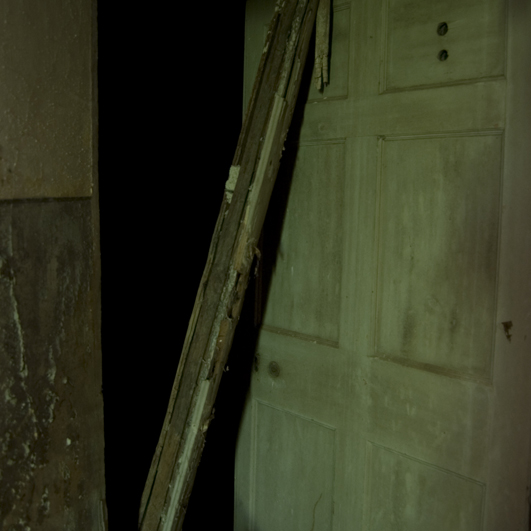 Yes it’s in ghettostyle 128kbps, if you want a bigger version to play out or whatever ask me and I might have one lying around somewhere. If you want to show some love, you can still pick up a copy of Ghost Frequencies from Moving Furniture.

In other areas, I’ve been embarking upon a series of adventures, exploring the old, abandoned, derelict and forgotten. So far this has taken in Railways Tunnels, Castles, Bunkers and Hospitals. I’ll post a few samples below but there are full sets for each over at my Flickr stream. I think you need to be a contact to see the full size versions of things so drop me a message if you want me to add you. I would like to point out that my explorations of these sites are conducted in the most respectful of manners and out of an interest in their historical, cultural, archeological and psychogeographical properties.¬† I take available opportunities with access and never create them, I never lay a finger on any items that I come across. The general rule here is “take only photo’s, leave only footprints” which is a pretty sound philosophy.

In terms of other input, it’s been a while since I did one of these lists so I won’t go into huge detail but I’ve been reading Sculpting in Time where Tarkovsky talks in depth about his art. I’ve also been reading Infinite Crisis and Countdown to Final Crisis from DC whose large story arcs and immense characterisations I’m just finding a deep thirst for.

Visually I’ve managed to watch a huge amount of films over the summer, including rewatches of Blue Velvet and Eraserhead, Finally getting around to seeing Rashomon, Waking Life, Man on Wire, The Joy Division Documentary, The Wave, Catch 22 and MASH, The Fall, and W to name the handful that spring to mind. More recently, I had the utter pleasure of seeing Godard’s Alphaville¬† on the big scree at the DCA in Dundee which I adored and also (vis BBC iPlayer of all places) The Bothersome Man which was fantastic, it came across like a very black satire of an Ikea catalogue, worth seeking out for sure.

I think I’ve rambled on enough, keep an eye on my flickr, I’m posting new sets all the time. I start at Duncan of Jordanstone in Dundee early September doing my degree in Time Based Art and Digital Film which I’m looking forward to hugely (but kinda nervous about being the weird old guy in my year, ah well, c’est la vie).

I should also say Happy Birthday to the ridiculous amount of people who had their birthdays recently including my sister, Louise and Moving Furniture’s Sietse/Orphax.