This Friday, 27th May, will see me performing The Breath Between Marks at the closing event of the Cabin: Codex exhibition, downstairs in Centrespace/VRC at the DCA in Dundee, 6pm – 8pm. The score has been constructed using elements taken from the artists’ books which are on display and mirrors the curational narrative of a journey from urban to rural space. Here’s a short excerpt of a recording of a run through the piece.

The Breath Between Marks (excerpt) by Erstlaub

Hope to see you there on Friday.

So, what does Erstlaub get up to in the dead season between terms at artschool? A nice relaxing holiday? Caiprinhas by the pool?

Well no. It would appear that he just powers on, doing slightly crazy things in a misguided attempt to keep the endless roar of the universe at bay.

This week, I got around to thinking about tape as a physcial format (an extension of earlier investigations with Blown and The Decline of Physical Memory i guess). I recorded about 40 minutes of recently built synth work over to cassette and then dubbed it additionally onto another 2 tapes.

One tape I immersed in hot soapy water for 45 minutes, the other I immersed in cold water and then froze. Once I’d dried out the tapes and recaptured the results, the effects were a little bit too subtle for my liking, I was more interested in the artifacts of process than the original source material so, in order to magnify the texture and inconsistency, to get right into the cracks between things, I slowed the playback process down to a quarter giving each pop and click, each modulating texture the space and time to unfold under its own weight. The result is a 2 hour 20 minute and 16 second ultra-reductive piece titled ‘The Persistence of Decay’. The experiments were originally intended for submission to an upcoming tape series for Broken20 but, well, it’s not going to fit on a tape now is it? So, I decided to just leave it out there as an Mp3, floating in the ether. 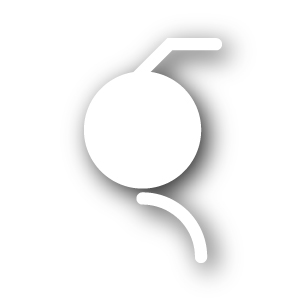 You can get it here, it may appear elsewhere at some point in the future but it’s plans are undefined as yet. If anyone makes it through the entire duration, get in touch and I’ll maybe buy you a cupcake or something.

The Last Few Seconds Before Sleep picked up a nice little post over at Drowned in Sound this week. Here’s what Rory Gibb says.

“Sound sculptor Erstlaub’s new release reprises a similar theme to that of his last Highpoint Lowlife release, Sleepwalking Into The Underworld, and a similar sonic palette. His music is characterised by beautiful long periods of droning ambience punctuated by tiny flickers in the backdrop and drawn out climaxes, like the final second before a massive dancefloor track drops stretched out to a 45-minute eternity. The title fits the soundworld perfectly; during the final few seconds before dropping off the mind heads off into free-associative freefall in which consciousness remains for the briefest of moments, a sensation the album accurately recreates in wind-tunnel greyscale. Erstlaub has just recorded an excellent new mix for Broken20’s podcast series, BrokenCinema, which brings together film soundtrack music that’s inspired the label and works as a nice counterpart to the album. Download it here.”

In other news, I got my results for 3rd year of my TBA degree and I got an A1. There’s some debate about whether that mark’s ever been given out before so I’m feeling very surreally pleased about the sketch. Bring on the chaos and intensity of 4th year, already starting to seed some pretty big plans for what may well become a masive and all consuming project but I’ve still got a ton of research to undertake before I start to manifest it.

For the completists among you, you can get a wonderful digital copy of Issue 4 of Satellite here, the largely awesome DoJ student produced zine which I have something of a habit of contributing to. There’s a pseudonymously published piece in there that I wrote, as a sort of psychogeographic primer. Enjoy.

Thanks to the people that inspired and kept some semblance of sanity around me throughout 3rd year, you know who you are.