As part of my Sanctuary 2015 commission, I built a series of light reactive synthesizers that are ‘played’ by light (either their frecuency, amplitude or both). The piece wil be ‘played’ by a combination of projected visuals and/or the the interruption of light and use of torches by members of the audience. 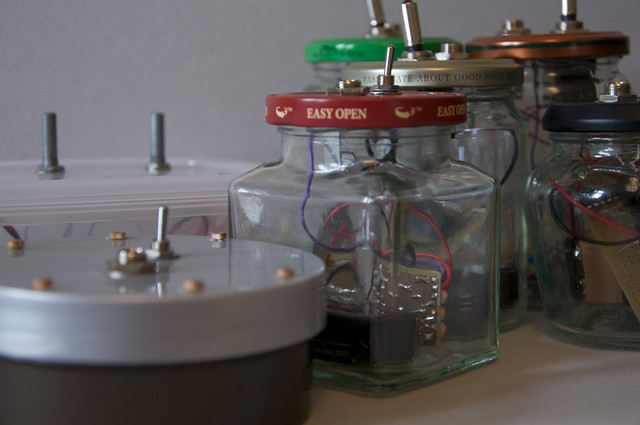 I find a real beauty in the simplicity of (mis)using the CMOS 40106 IC Schmitt Trigger as a musical device. By varying the resistance between points, the amount of time an attached capacitor takes to charge and discharge, subsequently flipping the switch gate, we can easily derive some form of frequency control. A single chip is packed with 6 switches allowing for up to 6 independent (or cross modulating) oscillators to be created.

In these devices, the majority of them use light dependant resistors (LDRs) to vary the frequency of the oscillators, larger value capacitors increase the period between charge and discharge pushing them into lower frequencies and rhythmic clicks.

When designing for this commission, a problem was trying to find a suitable and sturdy way of mounting the LDRs to a casing, particularly given that they would primarily be used in a field in the dark and the damp and there would be absolutely no provision for field repairs.   The use of jars that allow the light to pass through meant I could solder the LDRs directly to the circuitboard without having to run complex panel wiring and have points of exposed weakness.

These synthesizers can be interacted with, but there is something quite beautiful in their primitive and unpredictable nature, they will behave as circumstances cause them to and, while we may interact with them by shining or projecting light onto them, they are largely autonomous.

The series of devices will be connected to a mixer and processed and mixed together in an attempt to combine and shape the chaotic source material generated by projecting black and white kaleidoscopic film over them.

This series comprises of the following: