So, here’s a piece i recorded the other night . It’s essentially a live meditation for choral music, modular synthesizer and delay loop.

I used a mixer and VCAs being fed with random bipolar voltages to send several seeds into a delay loop, each of which was capable of being filtered. A Boss DD20 delay was patched into the system via an ALM s.b.g module and then on its return lovingly embraced by the powerhouse that is my Makenoise Erbeverb.

I was definitely channeling Basinski on this one I think.

The video is yet another one in my ongoing  ‘I have recorded SO much footage of water’ series.

Another attempt to stem the flow of spammy traffic and wordpress hacks leads to another white knuckle, oh shit I’ve lost a bunch of stuff again couple of days.

Managed to drag most things back (but for some reason not the last 6 months worth of posts //shrug).

Now back to try to fix the problems that started all of this nonsense again.

Here’s a streamable version of Tropospheric Radio Broadcast 02 that has been produced for Basic FM.

You can catch broadcast 03 on Friday at 13:00 and Tuesday and Friday next week at the same via this link.

I’ve been super busy of late with normal life things but I have recently (under  the ever ‘unreliable’ banner of the National Tropospherics Commission) launched a new piece of broadcast art via the diverse and quite wonderful Basic FM.

The premise is as follows (taken from the NTC website):

At 02.35 (EST) on the morning of 23rd May, 2014, during a routine scan of shortwave bands our field agents are known to use, one of our automated remote listening stations near Exton, PA picked up a transmission on a frequency usually devoid of activity.

While we occasionally observe stray interference across our private frequencies, it is generally easily identifiable as such. In this instance the sustained nature of the transmission suggests something intended rather than the result of atmospherics, a stray carrier or other phenomenon.

Lasting exactly one hour, the transmission, as per standard NTC protocol, was captured and sent for analysis which has, as yet, proved inconclusive. Exactly two weeks later, at the same time, a second broadcast was received on the same channel, lasting the same duration and this bi-weekly occurrence has repeated with different content up to the present. This pattern suggests some conscious attempt at communication.

We have as yet been unable to determine the origin and nature of the broadcasts and have therefore requisitioned airtime on Basic Fm and temporarily declassified these transmissions in order to retransmit the anomalies in the hope that they may be decoded or debunked.

As long as the pattern continues, we will re-propagate each transmission in full until such a time that they reach their intended recipients, are decoded or the channel goes dark again.

Retransmission begins at 13:00 (gmt) on 17th of June 2014, on basic fm, and will repeat at the same time every Tuesday and Friday. New broadcasts will be aired bi-weekly for as long as our listening post continues to receive them. Please feel free to follow @TropComms and @basic_fm on twitter and visit http://www.basic.fm/tropospheric-radio/ for show info.

You can catch the next broadcast as it goes out this coming Tuesday at 13:00 (repeated on Fridays at the same time) but in the meantime, you can stream the first broadcast below.

Another part of whatever the next album will be, coming together, a new bit of rumbly, droney, scratchy, noisy techno gear.

Here’s a new work for your perusal.

The Moon In The Water from Erstlaub on Vimeo.

I have been thinking about Navid Nuur’s ‘Renderender’ as a series of hyperlinks and interconnections, if you were to think of it as a Wikipedia article, it is interesting to note the blue underscores, the way in which different works relate to each other through content, theme, process, language, shape, texture and so on.

Spending time in the physical presence of the slide projectors and considering the way Nuur uses the projector for magnification via the teardrop piece, coupled with his methods of time displacement throughout the exhibition – the splitting up of a single moment, or the cohesion of multiple spans – formed connections with this work and spurred me into rediscovering and presenting it tonight. 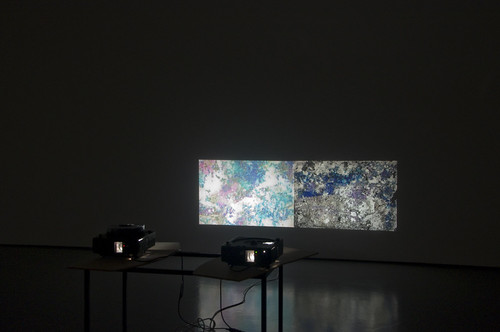 “The Japanese therefore see a particular charm in the evidence of old age. They are attracted to the darkened tone of an old tree, the ruggedness of a stone, or even the scruffy look of a picture whose edges have been handled by a great many people.

To all these signs of age they give the name, saba, which literally means “rust”. Saba, then, is a natural rustiness, the charm of olden days, the stamp of time. ‘Saba, as an element of beauty, embodies the link between art and nature.” 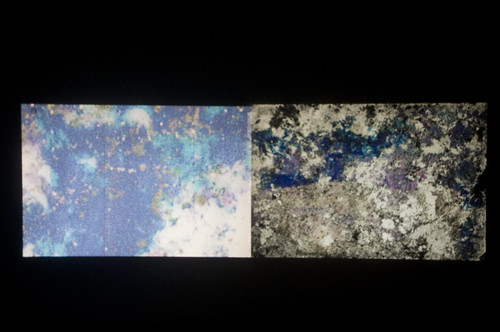 Nostalghia – takes a 35mm slide, found in a muddy puddle and projects it alongside a sequence derived from scanning it at 4800dpi, printing on transparency, cutting up and (re)housing in slides as an exploration and abstraction of the original found object. 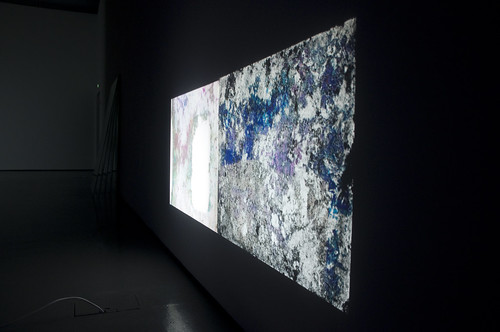 The found object has always held an appeal to the artist, the ever presence of its ‘ur-life’, its circumstantial detachment from it and willful repurposing in a new context. In particular I find the idea of the found, captured image fascinating as an ‘edited reality’, a discrete point in space/time, hyper-edited by the photographer in both physical and temporal dimensions, framed exactly as desired by its creator. 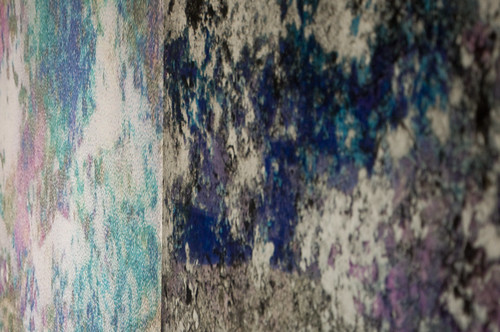 In this instance, a further process saw the image being deemed important enough to be transferred onto a slide and presumably proudly projected until it became through unknown circumstances, discarded, in a puddle for whatever period of time passed until it came into my presence. 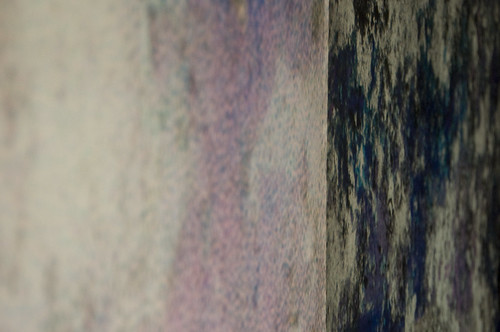 With nature and the elements entering into a relationship with the object, affecting the material and chemical composition, it has become something new, something ‘other’ – a series of new landscapes or maps resultant of time and process, interacting with the original content of the slide and it’s subsequent existence.

A single moment in time, fractured and explored from different perspectives.

I *think* I’ve managed to fix this but we’ll just have to wait and see.

Tonight, I shall be presenting work as part of DCA’s ongoing ((echo)) event, which sees artists making short term installations, presentations, performances, etc in response to the gallery programme. Tonight sees the first public presentation of my piece ‘Nostalghia’ alongside work and presentations from Holly Keasey & James Lee, Tamara Richardson, Jessie Giovane Staniland and Daniel Tyminski. The event is in the gallery at DCA, Dundee, from 7-8pm and entry, as ever, is free. Here is a link.

In the meantime, here is a trio of recent sculptural soundworks for your delectation. As ever, I’m available for performances/commisisons etc. so just drop me a line if you’re interested.

I’ll hopefully post up my presentation notes from tonight’s event here in the coming days.